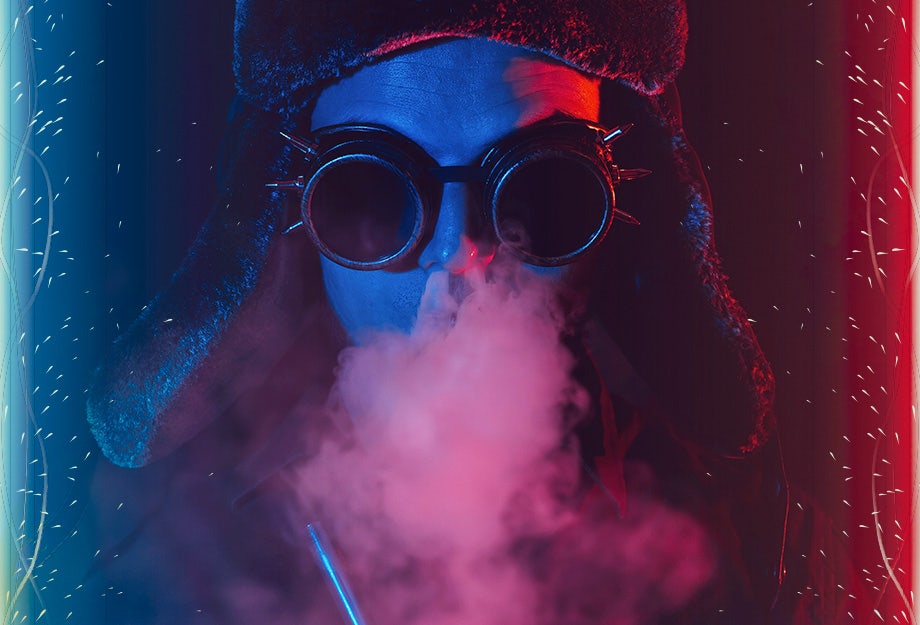 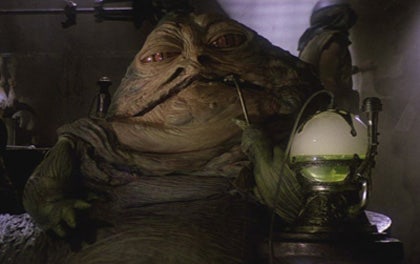 You don't have to be a Star Wars fanatic to recognize this bad boy. The infamous kingpin of the Outer Rim himself, one of the most notorious crimes lords in all the galaxy, Jabba the Hutt (full name Jabba Desilijic Tiure, for you fellow geeks out there). Jabba is arguably one of the most widely known hookah smokers in pop culture, and is rarely seen without his beloved hubbly-bubbly. 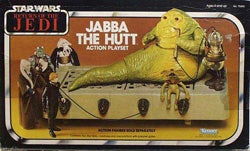 I've been a huge Star Wars fan ever since watching A New Hope for the first time as a child. When the Return of the Jedi action figures came out in 1983, Jabba's playset included his own little plastic hookah, and I remember going over to play with it at my friend's house, sticking the end of the hose in the little hole in Jabba's mouth. Being 4 years-old at the time, I had no clue as to what this was - I assumed it was a crazy straw of some kind, or perhaps some elaborate Pixy Stick? Little did I know that I would be in the hookah business 25 years later! 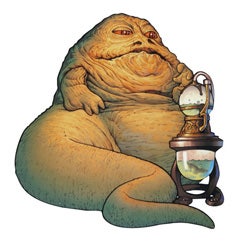 As for the water pipe itself, Jabba's hookah was quite a unique piece, mostly because he kept a "feeding bowl" underneath the smoke chamber where he would store various creatures he would snack on (mostly Klatooine paddy frogs). I thought briefly of making this happen with my hookah, fashioning a chamber underneath the base so I can store an egg salad sandwich, however the novelty of this idea was soon overshadowed by the sheer ridiculousness of it… I often wondered how Jabba's hookah functioned, being that there are no coals visible, and since the glass dome was always filled with smoke, I asked, "where is the downstem?" After doing some research, I came across an early conceptual drawing of Jabba showing his hookah sans smoke, and the downstem is shown reaching towards the water via the center of the dome:

(by the way, judging by this picture, Early Jabba really needs to change the water in the base, you've got some serious funk growing in there, bro!). I supp

ose one has to use their imagination when it comes to how his T'bac (the correct term) is heated. In a world of planet-destroying starships and anthropomorphized robots with British accents, a hookah with its own heat source is not that far-fetched of a concept.

It was common for Jabba and other Hutts (that's right, there were other hookah-smoking Hutts! But you Star Wars fans already knew that, right?) to gather around their huge bulbous narghiles and relax. I imagine they would discuss various smuggling tactics, the best ways to prepare sandmaggot kidneys, or how much of a butthole that Gardulla the Elder is. As my friend and fellow blogger Kyle pointed out, since all this took place “a long time ago in a galaxy far, far away,” is it possible that the Hutts were the originators of the modern day Hookah Lounge? Aside from the Hutts, several other Tatooine denizens were fans of the nargile. Many viewers may have noticed this pug-nosed shady figure when Obi-wan and the gang first walk into the Cantina in Star Wars Episode IV: A New Hope: 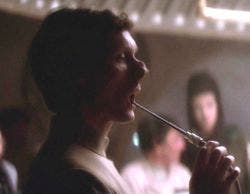 This curious creature, standing at the bar and puffing away slyly on his thin, metal hookah hose, is Dannik Jerriko. In the original Star Wars script, Dannik was simply an extra known as "pipe smoking alien" whose table is disturbed when Pando Baba gets his arm severed by Obi-Wan. His backstory was later written as an Anzanti bounty hunter, with 2 proboscises sticking out of his face that he would stick up his victim's nostrils and suck out their brains (or "soup," as he would call it). No kidding! He was even featured in his own short story titled Soup's On: The Pipe Smoker's Tale from the book Tales from the Mos Eisley Cantina published in 1995. So how much of a hookah fiend was Dannik Jerriko? To answer that, I present to you his action figure that was released by Hasbro in 2005:

Notice he keeps his hookah on his belt. On his belt! This is the definition of an intergalactic hookah fanatic – this guy can't be without his hookah for a second and thusly keeps it on his person at all times! Now this is an accessory that we'd love to carry. Instead of a cell phone or pager, you can fashion a small hookah to your side and go about your day! This raises the question: did Dannik make the hookah belt adapter himself, or did it come with his hookah? Is there a store somewhere in Mos Eisely that sells them, or did he have to send away for it? Perhaps I'm looking too far into this… 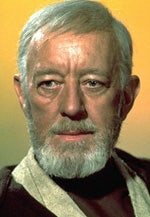 Now, I'd like to point out here that not all the partakers of the hookah in the Star Wars universe were brain-sucking bounty hunters and obese villainous tyrants. Obi-Wan Kenobi, the old Jedi Master and defender of the Galactic Republic himself, was known to sit around a hookah with friends and discuss all things Jedi. In the novelization of the first Star Wars movie, ghost written by Alan Dean Foster and published in December of 1976 (six months before the movie was released,) Obi-Wan smokes from his hookah while talking to Luke in chapter 5. "I was once a Jedi Knight the same as your father" he says, while puffing away on his chrome water pipe. It has also been pointed out by several keen-eyed Star Wars fans that Obi-Wan's hookah is visible in the movie, sitting in the corner of his hut on Tatooine:

Hookahs also make an appearance in over 20 different Star Wars short stories, novels, comic books, or video games. So here's where our hookah adventures in a galaxy far, far away ends, my friends. Please keep in mind that this is not comprehensive list, and I'm sure I've missed many other hookah-smoking Star Wars Characters. If I've made any errors or omissions please feel free to contact me or make a comment. Stay tuned for part 2 where we look at other Hollywood hookah fans!