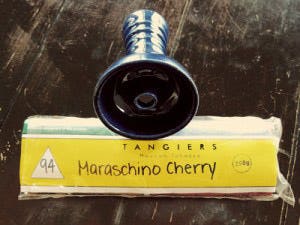 Several words come to mind when describing Tangiers Hookah Tobacco: Esoteric. Intricate. Loyalty. Let me explain; Tangiers is a hookah tobacco that requires special instructions, care, patience, and work. But once you get Tangiers to smoke right (and believe me it will take some trial and error to get it right), you are a Tangiers fan for life. People swear by this stuff! However, many people can't get it right and give up. There are tons of videos and discussions all over the internet about how to smoke Tangiers, but you may find some conflicting advice. Let me lay it all out for you: 1. Acclimating your Tangiers Hookah Tobacco: Basically you're going to need to adjust your Tangiers to your unique climate conditions. Due to varying climates (temperature and humidity play a big role in this), each individual's acclimation process will be different. Keep in mind that it will need to acclimate in the environment you're going to smoke it in (you don't want to acclimate your hookah tobacco in your 45° garage and then smoke it indoors at 75°). Find a wide, shallow container to pour your hookah tobacco into. I find that it's best to use approximately 100 grams at a time. Mix it well and often. Once an hour is a good starting point. At first, your hookah tobacco will have an aroma similar to soy sauce or barbecue sauce. That's normal. But if you smoke Tangiers while it is in this state, you will have a harsh, difficult to enjoy session. Keep mixing, exposing all of your hookah tobacco to the air (in other words, without a lid or cover) until the soy sauce smell goes away. Pretend you're mixing cheese into your macaroni. You wouldn't want to eat the noodles without the cheese would ya? No. Believe me, you won't want to smoke this until all of it has been exposed to the air long enough either. A good rule to follow is to wait until your hookah flavor actually smells like what you ordered. Again, this process can take anywhere from 4 hours to several days depending on how often you stir, how consistent your environment is, and how well it's evenly distributed and exposed to the air. I understand this seems like a lot of information, but trust me, this is very important. Be patient. The payoff will come.

2. Packing your Bowl:  Forget what you know about packing hookah tobacco. The rules do not apply here. Grab a Phunnel Bowl, Foil, and a small fork. You will want to pack your hookah bowl as densely as it is in the bag. How do you do this? Easy. Take your small fork and shovel your Tangiers hookah tobacco into your Phunnel Bowl, packing it down firmly until it is flush with the top of your bowl. Make sure you remove all tobacco from around the center spire. Place the foil on top of your bowl, pressing down to compact your hookah tobacco. This will even out any areas of your tobacco and ultimately show you if you need to put more on. The picture below is a good representation of a properly loaded bowl of Tangiers.

3. Air Flow: Once you have the right amount of hookah tobacco in your bowl and it is firmly pressed down (like the picture above), carefully lift the foil off the hookah tobacco just enough to flatten the foil around the bowl.  This will create just enough of a passage between the spire and the foil for proper air flow. You'll want to poke medium sized holes in your foil and a lot of them. I recommend using a thick toothpick. Also, I find you get better air flow if you poke down into the shisha a bit, not just deep enough to puncture the foil. And don't forget about the center. You'll want it covered in holes as well. See below. 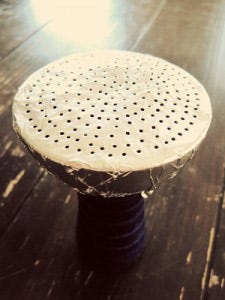 4.  Heat Management:  If you're using square Natural Hookah Charcoals (such as Coco Nara Coals or Exotica Coals), they tend to burn hotter than other coals, so you may want to cut them into 1/2 traingles. Next proceed by putting 2 half triangles on. The key is to start with low heat and then lit it simmer for about a minute.  If it's not smoking right yet, add another half triangle piece. Keep adding heat until you start blowing some majorly thick puffy clouds. I like to rotate my coals while smoking Tangiers quite frequently - every 5 minutes or so. I have a Phunnel Bowl and I end up using 4 or 5 half triangle Coco Nara coals. They only last about 40 minutes, but then again, they're halves so I'm not wasting a lot of coal. If you're using Quicklight Hookah Coals, I recommend cutting them into halves as well. You DO NOT want to burn Tangiers hookah tobacco (or any brand of hookah tobacco for that matter). You'll end up needing to take out all of the burnt shisha and starting over. This requires a bit of patience as well. The key is to start slow with low heat and work your way up. This may not be the easiest or the fastest brand of hookah tobacco to prepare, but some of their flavors are untouchable! Ever stop to think about how many ingredients and steps go into making something as simple as a cake? I doubt it. All we care about is that the cake tastes delicious. That's the mentality behind Tangiers Hookah Tobacco. At first, it may seem crazy, overwhelming, and frustrating to get right. But once you get it right, it's worth it! Consider this a challenge! Happy Smoking friends!