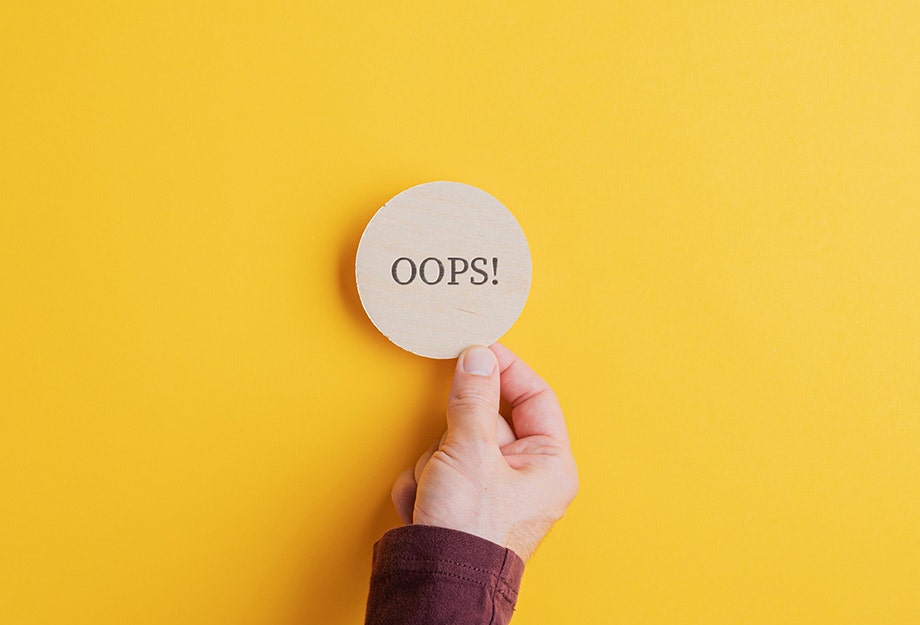 Everyone loves a good fail, right? Unless it's happening to you, of course. In the hookah world, where the learning curve can be a bit steep sometimes, fails abound. In this version of our popular Hookah Fails series (see the original hookah fails post, and our late night hookah fails post) we tackle hookah fails that occur when you are running low on supplies and desperation sets in. Check out these hookah fails that we have either seen personally, or have heard horror stories about and enjoy!

Making your own shisha at home can be done, but you need the proper ingredients and the proper techniques. Without that, attempting to whip up a batch of Tom's Special House Blend at home might end up in hookah fail territory. We heard a tale from a customer of his roommate attempting to make shisha out of the tobacco from a couple of broken up cigarettes, some honey, and some vanilla extract. Needless to say, it did not go well. Leave the shisha production to the pros. 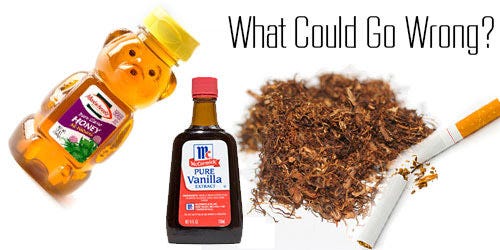 Running Low On Shisha Fail #2 - Straight Tobacco In The Bowl

If you thought a weak batch of homemade shisha was bad, you have no idea how bad smoking straight tobacco out of your hookah is. This is one we've witnessed personally a time or two before. While a nice pipe, or cigar can be a completely wonderful smoke on it's own, can you imagine inhaling a huge lungful of that stuff?!?! Not only will you be in for the harshest puff of your life, your head will likely feel like it is going to pop from all of the nicotine. Stick to shisha, and leave the rest of the tobacco for more moderate consumption methods. 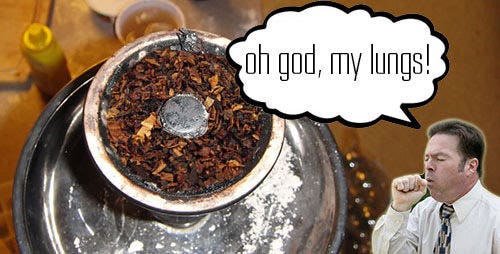 Desperation has a definition, and that definition is trying to reuse your hookah foil. If you want to have a good laugh, just sit down and watch someone try to carefully scrape blackened shisha off of the bottom of a sheet of hookah foil poked full of holes without tearing it all up. It. Is. Hilarious. Foil is cheap, so keep an extra 50 pack on hand so you don't have to embarrass yourself. 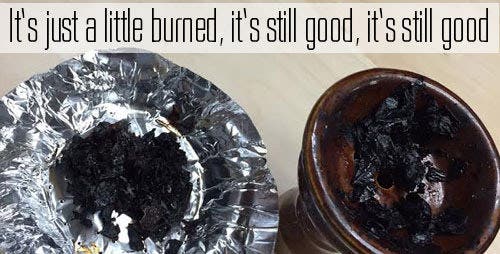 We just covered the folly of trying to re-use your hookah foil, but this fail deals with a situation where you don't have any foil to begin with. If you are a frequent visitor of the hookah subreddit, then you may have seen this photo before as it is one of the most popular posts of all time. Essentially, someone was out of foil, and in a moment of insanity they wrapped their bowl tightly in colored foil from their Easter candy. There's a good chance that this situation was set up simply for the LOLs and the photographer didn't actually smoke with this, but just in case, we'll drop a disclaimer to never ever ever ever inhale whatever comes off of colored foil of unknown origin when you dump hot coals on top of it. Fail! 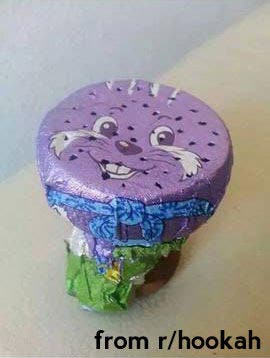 We can't be sure if we dreamed this one up or if it was real but we swear that we have seen a pic floating around the internet of someone smoking hookah with a hot clothes iron on top of their bowl instead of foil and hot coal. Where do we begin with this? First off, just no. Secondly, have you ever heard of airflow? How could you ever smoke with a heavy metal object cutting off all airflow to your bowl? The answer is that you can't. Fail Fail Fail. 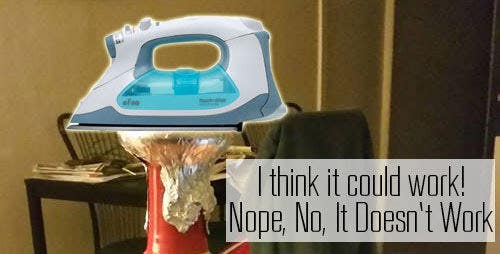 Running Low On Coals Fail #2 - No, You Can't Use A Torch Lighter

This is one we've encountered a handful of times. New hookah smokers tend to not understand the difference between heating your shisha to slowly release all of the goodies inside through vaporization, and straight up burning the hell out of your shisha. We can understand why, as almost all other things you "smoke" are burned down to ash, but if you see your buddy holding a flame directly to his bowl of shisha while drawing from the hose, please give them a quick tutorial on how it all works and let them know that it's worth saving that next smoke until they have some proper coals in place. 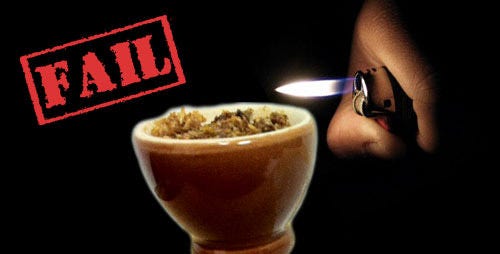 This is a bit of a rare hookah fail but it's also a gigantic mess when it happens. If you are smoking at home, chances are that you have ready access to fresh, clean water to put in your base. Experienced travel smokers know that bringing bottled water with you to fill your base is just as important as bringing the coals, shisha, or the hookah itself. But sometimes you are in a hurry and you show up at the lake, the park, the beach, or wherever else and you realize that you have no water. Dry hits from a hookah will wreck your throat, but do you know what's even worse? Using ANY type of water that did not come out of a tap, or a bottle. It may seem like that lake/river/ocean water would do the trick but all of the tiny microscopic organisms in that water will do some nasty stuff to your hookah, your hose, and potentially your lungs. Never ever ever fail like this and always remember that clean water is as essential to your session as your coal or shisha. 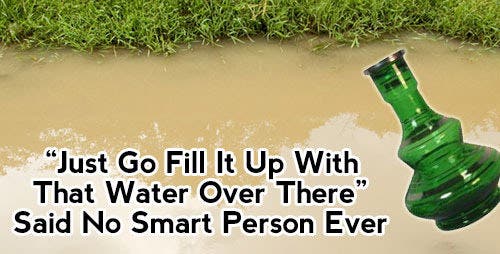 I've Got Hose In Different...Wait, No, I Forgot My Hose

This one can be a bit of a laugh when it happens but despite it's hilarity, we'll still call it a fail. We've seen photos floating around the web of people forgoing the use of a hose (maybe they forgot it? Maybe it's got a leak?) and, instead, smoking the hookah by putting their mouth directly on the hose port and inhaling. There are some serious issues with this. First, you look pretty dumb. Second, if the hookah were to move around suddenly while you are making out with the hose port you could dump a load of hot coals right on your head. Like we said, it's pretty funny to watch but definitely counts as a fail.