Logo
Contact Us
Home | Blog | The history of hookah 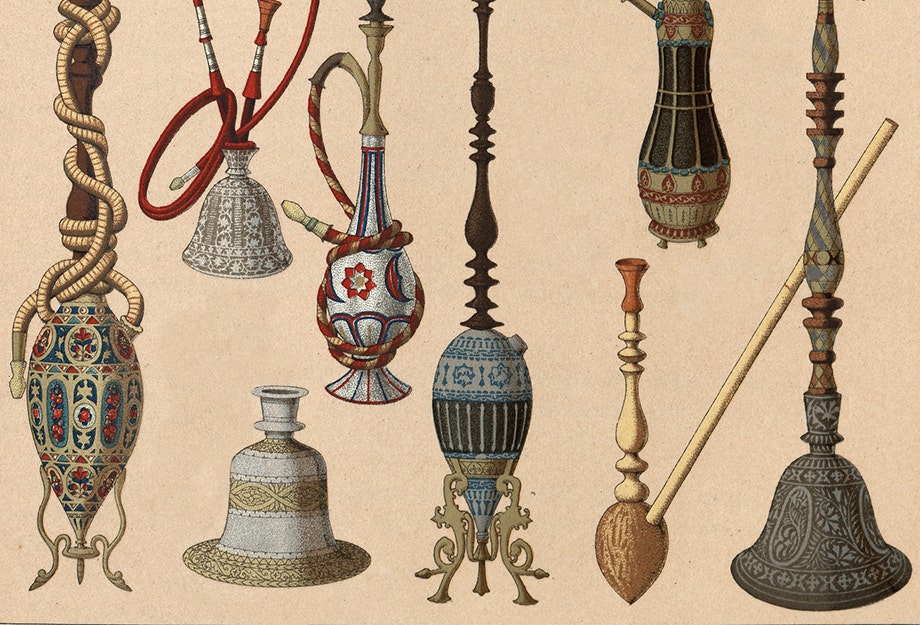 The History of Hookah

Kalyan, sheesha, shisha, okka, goza, nargeela…the list of terms used to describe what we know as Hookah goes on. It’s a hobby that spans the globe, from Turkey to the USA, and its popularity isn’t dwindling. But how did it get to be so popular? Who created it? And when was the first hookah made?

If you find yourself asking these questions during a smoking session, you’re in luck. This is the history of hookah, from its early origins to today.

The first hookahs in the fashion and style we recognize today were created in 16th century India. It’s said that the first recognized use of the hookah was in the city of Fatehpur Sikri, where, in the mid-1500s, tobacco was introduced to the region for the first time. Tobacco quickly became popular amongst the aristocracy, but they needed a new way to smoke it.

Enter glass manufacturing, a skill which was becoming popular in India via the British East India Company. The increased use of the material led to Hakim Aboul Futteh Ghilani, the physician of Akbar, developing a glass base filled with water through which smoke could be purified. According to records, this was the first ever hookah, and Hakim Aboul Futteh Ghilani was the first person to invent it.

However, smoking shisha tobacco was still regarded as a hobby for the nobility.

Hookah, or Nargileh in Persian, was also widespread and accessible to people of all livelihoods – not just the nobility. This, combined with changes to style and design, forged the birth of the hookah industry as we know it today.

Throughout the 17th and 18th centuries, hookah became increasingly popular in Turkey and the Middle East. Its rise in Turkish culture spelled the end of the dated look and brass designs and religious markings, with intricate patterns cast by blacksmiths. They were a sign of status, with the most valuable hookahs smoked after royal dinners and parties to signal trust towards guests.

Its arrival in the Middle East in the 19th century forever changed the tobacco used with hookah. Egypt introduced Mu’Assel, a type of tobacco created by combining it with honey or molasses – in fact, Mu’Assel translates to ‘with honey’. However, it quickly became a term for shisha tobacco containing dried lemon, mint, grape, and other flavors.

The region also developed the purge port – an invention which cooled down the tobacco to improve flavor. Not only did this change the course of hookah history, but it led to a dramatic increase in popularity. Smoking shisha was still a tradition amongst high noblemen, but it was also available in dedicated shisha cafes for anyone who wanted to smoke. It united locals of any class, race, and gender, and thus hookah culture was born.

Hookah culture continued to spread throughout Persia, India, the Middle East and Turkey throughout the 20th century, becoming ingrained in day-to-day society. By the end of the century, it had made its way onto virtually every continent.

Today, one of the biggest markets is the United States, where the quality of products improved dramatically. A huge range of new hookah accessories, hookah hoses, hookah bowls, and hookah charcoal was introduced. Now big business, hookahs themselves diversified, with different materials available for varying prices.

One of the biggest changes in modern times has been shisha tobacco, with an abundance of brands, flavors and types found in stores and hookah lounges. Whether you prefer to smoke Al Fakher, enjoy fruity shisha flavors, or prefer blonde leaf over dark leaf, the modern hookah industry means you can have what you want, when you want.

The history of hookah spans the last 500 years. In that time, we’ve seen hookah culture change from elitist to a hobby everyone can partake in. Who knows what the future of hookah and shisha will bring.

The History of Hookah FAQs

Looking for a TL;DR version of the history of hookah? Check out our FAQs below.

When Was the First Hookah Made?

It’s widely believed that the first hookah ever made was in 16th century India, in the city of Fatehpur Sikri. Tobacco had only just been introduced, and in the search for a new way to smoke it the hookah was invented.

Who Created the Hookah?

According to records, the hookah was invented by Hakim Aboul Futteh Ghilani, the physician of Akbar. He was working with a glass base filled with water through which smoke could be purified, leading to the hookah we all know and love today.

Where is Hookah Culture From?

While hookah culture began in India, it quickly spread to Persia, Turkey and the Middle East. Each region added its own spin on the hobby, but the Middle East was where shisha cafes allowed everyone of all race, gender and status to partake in hookah smoking sessions.