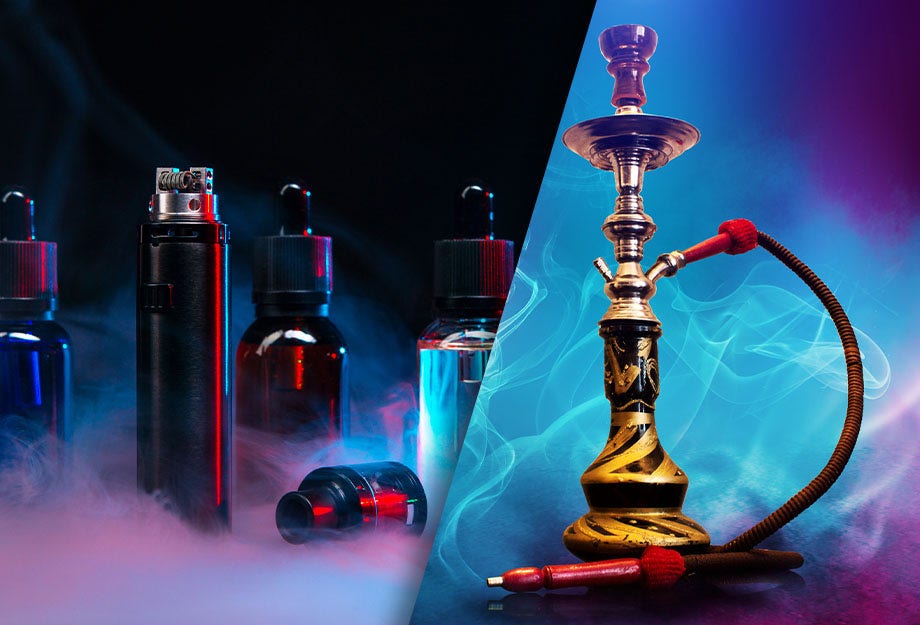 Over the last few years vaping has become one of the most common alternative smoking methods available, and along with it have come many questions in regards to its similarities and/or differences to smoking shisha tobacco in a hookah.

Today we're going to take a look at some of the commonalities and differences between each and answer some of the big questions about them to help you decide what method may work best for you.

What Is A Hookah?

A hookah is a waterpipe that is used for smoking shisha tobacco. Hookahs come in many shapes, sizes, and styles, but the basic parts and functionality will be the same across all hookahs. When smoking a hookah the smoke itself is generated at the top of your hookah in the hookah bowl, passes down through the hookah stem in to the base where it is filtered through the water, and then passes back up through the hose that you are inhaling on.

Shisha is the tobacco that is smoked in a hookah. Shisha tobacco differs from dry cigarette or pipe tobacco in that it is a wet tobacco that is soaked in a combination of glycerin, molasses or honey, and flavoring. This combination of ingredients allows for the flavoring juices to soak in to the tobacco leaves providing robust flavors and, in addition, this allows the tobacco to smoked over a longer period of time than dry tobacco as it is being slowly cooked as opposed to being burned or combusted. 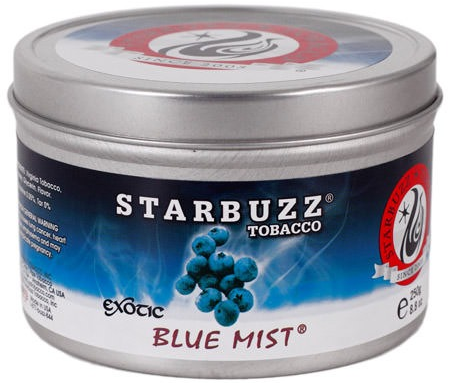 Where smoking hookah involves heating shisha tobacco and inhaling it through a hookah pipe, vaping involves using a vaping device to heat e-liquid or vape juice on a heating coil and then inhaling the vapor that is produced.

There are a multitude of different styles of vape devices and a variety of different names for each device such as "e-pen", "vape pen", "mech mod", "e-hookah", "box mod" etc.

Vaping devices range in size from small pen sized devices, to larger box shaped hand held devices, to electronic bowls or heads that are filled with vape juice and used in conjunction with a hookah pipe, but functionality wise almost all vapes function similarly to each other.

There are several terms for the liquids used in a vaping device such as "vape liquid", "e-juice", "vape juice", or "vape flavor" and often times the terms are used interchangeably.

Vape juice ingredients can vary quite a bit from brand to brand, but there are several ingredients that are common throughout most e-liquids:

1.) Propylene Glycol - Propylene glycol or "PG" is an odorless and tasteless alcohol that is commonly used as an agent to carry the flavorings present in e-liquid. It can be used in tandem with vegetable glycerin or used instead of vegetable glycerin.

2.) Vegetable Glycerin - Vegetable glycerin or "VG" is made from vegetable oils such as coconut oil, soybean oil, etc. and similarly to propylene glycol it is used as the carrier of the flavoring ingredients present in e-liquid.

4.) Nicotine - E-liquids may or may not contain nicotine and the dosage of nicotine will vary greatly depending on what milligram level you select. E-liquid packaging should show the nicotine content as 0mg, 6mg, 12mg, 18mg, 24mg, 32mg, etc.

Similarities And Differences Between Hookah And Vaping

First and foremost, whether you are smoking shisha tobacco in a hookah or vaping e-liquids you are inhaling a foreign material in to your body, so neither of them are as healthy or safe as not smoking all together. Any form of smoking or vaping carries an associated health risk that you should be aware of when choosing whether or not to partake in either of them, so make sure that you educate yourself on the risks associated with both.

When it comes to commonalities between vaping and smoking hookah there actually isn't a lot of overlap between the two. There are a few electronic vaping devices, such as the Starbuzz Wireless E-Head, which are filled with eliquids and then attached to a hookah to filter the vapor that is produced through the water in the hookah base that do bridge the gap a bit, but in general the method of smoking and the cultures related to each style are actually quite different and distinct from each other. 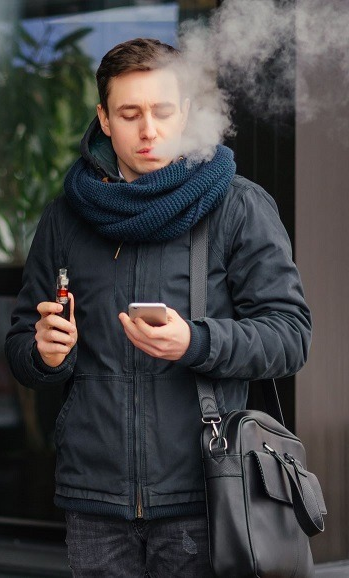 Vaping culture is still relatively and is typically comprised of people trying to cut down on smoking or ex-smokers. Vaping does tend to be a more personal hobby due to the nature of vaping devices, but there is also a growing online community where vaping enthusiasts share information and advice. There are also vaping conventions where enthusiasts gather to show off their customized vaping devices and share in vaping competitions. 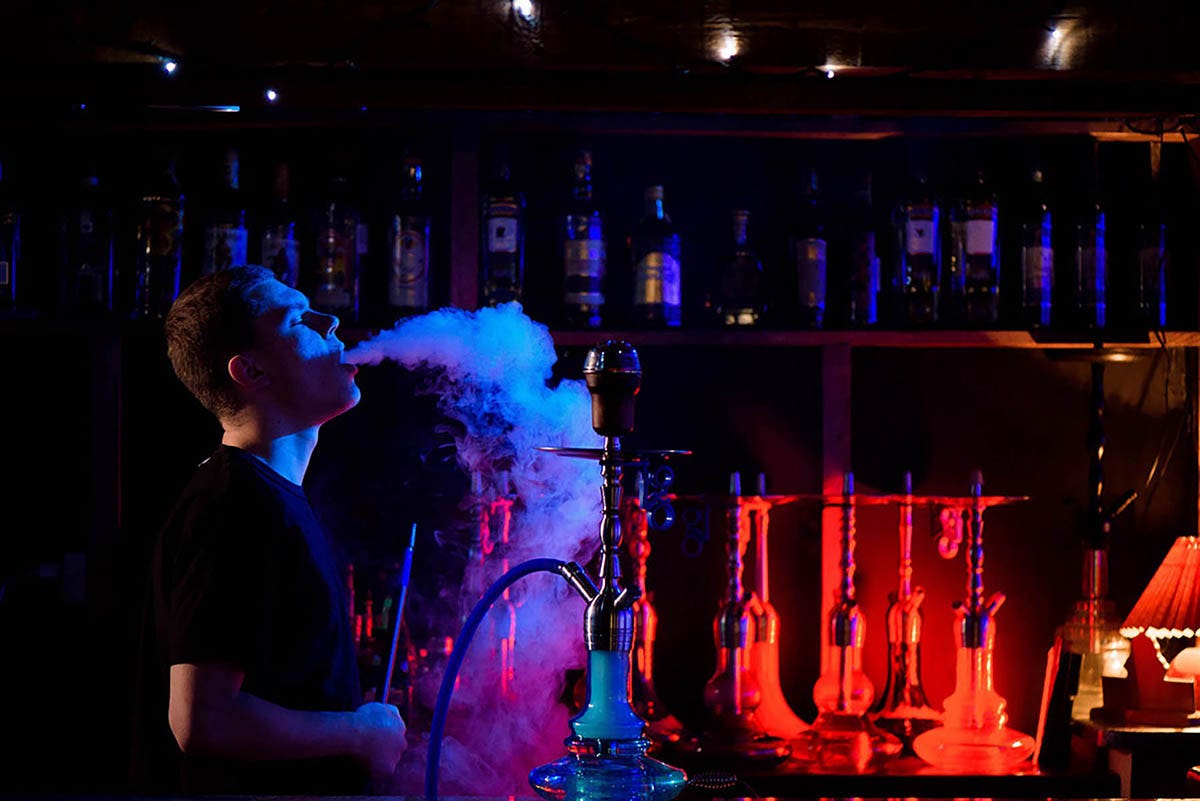 In contrast, hookah smoking is a social experience meant to be enjoyed with friends and family and is a more group oriented pastime. There are hookah lounges and cafes all over the world where hookah smokers come together to share a smoke session amongst friends and hookah smoking conventions or trade shows where various hookah and shisha manufacturers and enthusiasts gather to enjoy new products and flavors on the hookah market. In addition, hookah has a long and storied history across many parts of the world and, as a result, is unique in its ability to help form a social bridge across many cultures.

Still have questions that aren't covered above? Drop a comment down below to let us know and your question just might be our next blog!